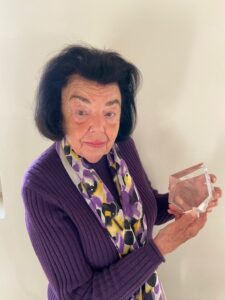 Mrs Opal Dunn, an honorary chairman of ICBA, received the Outstanding Achievement Award at the ceremony for the British Council ELTons Outstanding Achievement Award on 15th October 2020.  The Award recognises and celebrates people who have made a lasting and extraordinary impact on English language teaching and learning. The Award is said to be equivalent to an Oscar in the English education.

Mrs Dunn is a pioneer who developed the teaching language technique by using picture books. She also published some picture books which have been translated into various languages.  She started the English language Bunko in Japan for those bilingual children who learn the second language.

The Award selection committee recognised and highly appreciated her continuous support for children, teachers and parents with her rich ideas for teaching and learning language.  The Committee commented “There are now an increasing number of children in the world who grow up with multiple languages. Time has caught up with you. There is no one like you who has dedicated their life in children’s language education for so long.”

In her speech at the ceremony, she mentioned that it is important that children self-study through feel-good experience and that adult’s role is to prepare the right environment and sow the seeds. Things that children absorb naturally without any logic when they are young are important and bound for life. She quoted Kazuo Ishiguro’s words; “Many of our deepest motives come not from adult logic of how things work in the world, but out of something that is frozen from early childhood‘

The seeds sown by Mrs Dunn are evident and developed in the ICBA bunko and are still carried on. “Children First”. Mrs Dunn always put children first and practiced what she believed in in her support for teaching and learning languages. We would like to express our thanks and respect for her achievement. Congratulations on her winning the award.

ICBA UK planned a Study Day in March 2020, inviting three researchers from Tokyo. However, due to the rapid spread of coronavirus, we made the decision to postpone it. IC Bunko also stopped their activities from mid March and the lockdown was enforced on 28 March in the UK. Some lockdown restrictions have begun to be lifted from June, but the situation is still unsafe. Like IC Bunko, many people may be meeting with friends and family online during the current lockdown. Using this technology, we are now planning an online Study Day in July. More details will follow soon.

We sincerely appreciate The Great Britain Sasakawa Foundation for their support of this project.

This year 4 Bunkos made applications from ICBA UK.
Tottenham Bunko was awarded Y300,000 for the category “promoting/assisting the purchase of books for children” and Aiuen Bunko, Shirasu Bunko and Wight Bunko were awarded for the category “one hundred children’s books”.

On 24 November 2017, the ceremony for the bestowal of the Ambassador’s Commendation to Ms. Yoko Morishima, ICBA UK Branch Manager, was held at The Embassy of Japan. Her long term contribution to the Japanese community in London was highly appraised.

We are so delighted and proud that her 40 year volunteer work, devoted to Double Children was appreciated.

One Saturday in February, I visited Temari Bunko, one of the new bunko, in Highbury, North London. Temari Bunko opened on September 2015. Temari Bunko meets at one of the council’s facilities either on the second or third Saturday of each month. On the day when we visited them there were 15 children aged around 3 accompanied by 11 fathers or mothers. The meeting started by greeting everyone and registration calling out the children’s names in turn. This was followed by a session of singing seasonal songs. The children were also explained about Hinamatsuri (Girls Day cerebration). I observed that the songs were effectively used to run the activities. The children enjoyed an illustrated book read by one of the parents. Afterwards, they participated in making their own Ohinasama (a princess). Lastly, Kamishibai was read. At the end of the meeting, Mrs Dan told the group that any language should be absorbed like breathing rather than learning. She also suggested that refreshment time could be used for learning polite Japanese by engaging with children. Her talk was enthusiastically received. I then introduced myself and talked about ICBA’s history and my function at ICBA, which is looking after Kamishibai and making sure that they are circulated properly. I also mentioned that it is important that parents take this opportunity at Bunko to engage with the children, and that books are read by fathers, not just mothers (as I observed that there were two Japanese fathers). We noticed that there were not enough books for the number of children at the Bunko and gave some advice about acquiring more books, including a regular order placed with Kinokuniya bookshop in Tokyo and Itochu Foundation book grant. We got a positive impression from observing the children singing songs and enjoying themselves. (by Keiko Holt)

After the Great East Japan Earthquake and Tsunami hit Tohoku area in 2011, people around the world felt that they wanted to do something to help people who were suffering from the incident. We, at ICBA shared the same thought; what could we do to help them stand on their feet? What would be the things they wanted to receive? How could we send them in person? We were lucky to have got to know a priest at Rhyushoji Temple, Yamadacho in Iwate Prefecture. There were three nursery classes at Rhyoshoji Temple, where children were taught conversational English. The priest asked us if we could send them some English illustrated books for the children. We were happy to receive his request. All the IC Bunko in the UK came together and we sent books together with the cards that were created by all the children from each Bunko. We received a lot of thank-you cards in return from the children in Yamadacho. We, at ICBA sent them Christmas cards. We then received news such as New Year and graduation ceremonies. This is how our Friendship Card Exchange began. In 2016, on the 5th anniversary of the incident, we once again sent some illustrated books together with Friendship cards. It will be a long and difficult process until the areas will be the same as before the incident, but it was great to hear that people’s lives in Yamadacho are slowly returning back to normal. We had a pleasant surprise one day receiving lots of Kamishibai (paper theatre) from the priest. These were presents from Rhyoshoji Temple as the priest found that ICBA were getting short of Kamishibai. Kamishibai can be purchased in Japan but for children outside of Japan they are treasures. We would like to express our thanks to the priest and people at the nurseries for their kind thoughts and we wish that they continue to recover. We also wish for this friendship to flourish and continue in the future.

We have a brand new website. We hope you enjoy it!

Under the current situation, many of our 34 IC Bunko in UK are actively engaging online.